What to Know About Sports in Atlanta

Cory Sekine-Pettite in About Atlanta , Events , Atlanta Basics , Things To Do
January 31, 2022 6 mins to read

The city of Atlanta plays host to fantastic professional and collegiate teams, from football and basketball to soccer and baseball. The metro area has earned a reputation as a vast and varied sports center. With a packed calendar of sporting events and rich history, discover Atlanta’s favorite athletic pastimes with KNOWAtlanta. 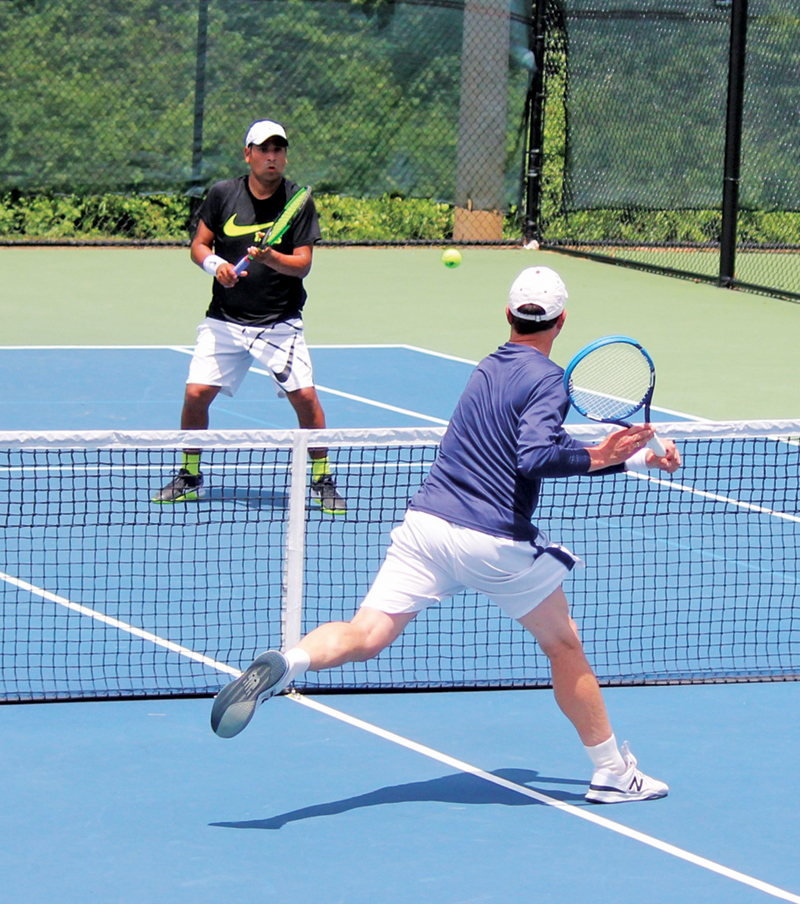 The Atlanta Lawn Tennis Association is a nonprofit league that consists of over 80,000 members. Established in 1934, the association contains 100 public tennis courts within the city limits of Atlanta, as well as many more in the surrounding neighborhoods and apartment complexes.

Before they were known as the Atlanta Braves, the newly crowned World Series Champions were known as the Milwaukee Braves over 56 years ago. Before, our city was home to the Atlanta Crackers of the Southern Association who held games at the Ponce de Leon Park from 1900 to 1965, fondly known as “Old Poncey.”

The only Atlanta team to win a major league championship, the Atlanta Braves now proudly sport four World Series wins after the 2021 win. While in Atlanta, the team holds the 1995 and 2021 titles. In addition, the team won the 1914 title as the Boston Braves and the 1957 title as the Milwaukee Braves.

A former football player for the Chicago Cardinals (1947-1955), Pro Football Hall of Famer Charley Trippi was a former member of the Atlanta Crackers during the 1947 season. Trippi hit a batting average of 0.334 before joining the NFL. 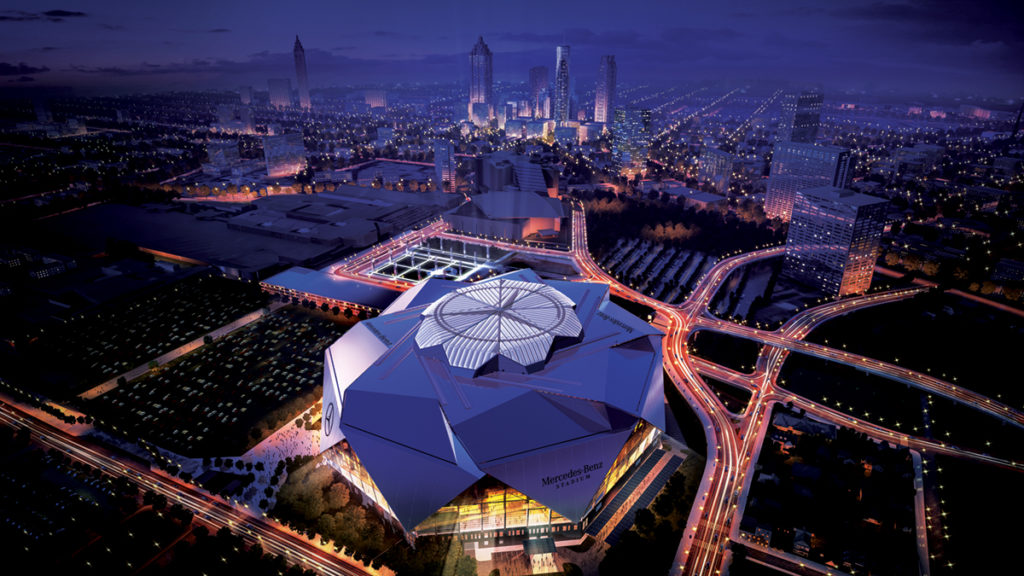 Mercedes-Benz Stadium is expected to be completed in August 2017.

Home to the world’s biggest free-standing bird statue, Mercedes-Benz Stadium features a 41.5-foot falcon, designed by Gábor Miklós Szoke of Budapest with a wingspan of over 64 feet. A unique feature for a sports facility, the stadium features edible landscaping with several blueberry bushes and apple trees around the building’s campus.

The Atlanta Falcons were established in 1965 as an NFL expansion team. Team highlights include two trips to the Super Bowl (1998 and 2017) and all-star players such as Dion Sanders, Roddy White and Matt Ryan.

In 1965, the team received its current name from a beloved fan and local schoolteacher, Miss Julia Elliott. She wrote, “The Falcon is proud and dignified, with great courage and fight. It never drops its prey. It is deadly and has a great sporting tradition.” The rest is history!

With roots tracing back to 1946 and formerly known as the New York Bisons, the Atlanta Hawks moved from St. Louis in 1968 and garnered fame as a southern favorite NBA team.

Many sports fans know the five Atlanta teams: the Braves, the Falcons, the Dream, Atlanta United FC and the Hawks. Although Atlanta currently lacks an official NHL team, the city previously hosted the Atlanta Flames (1972-1980) and the Atlanta Thrashers (1999-2011). The Atlanta Gladiators have called the city home for the past 16 years. While not an official NHL team, the Gladiators are members of the East Coast Hockey League, the nation’s premier “AA” hockey league. 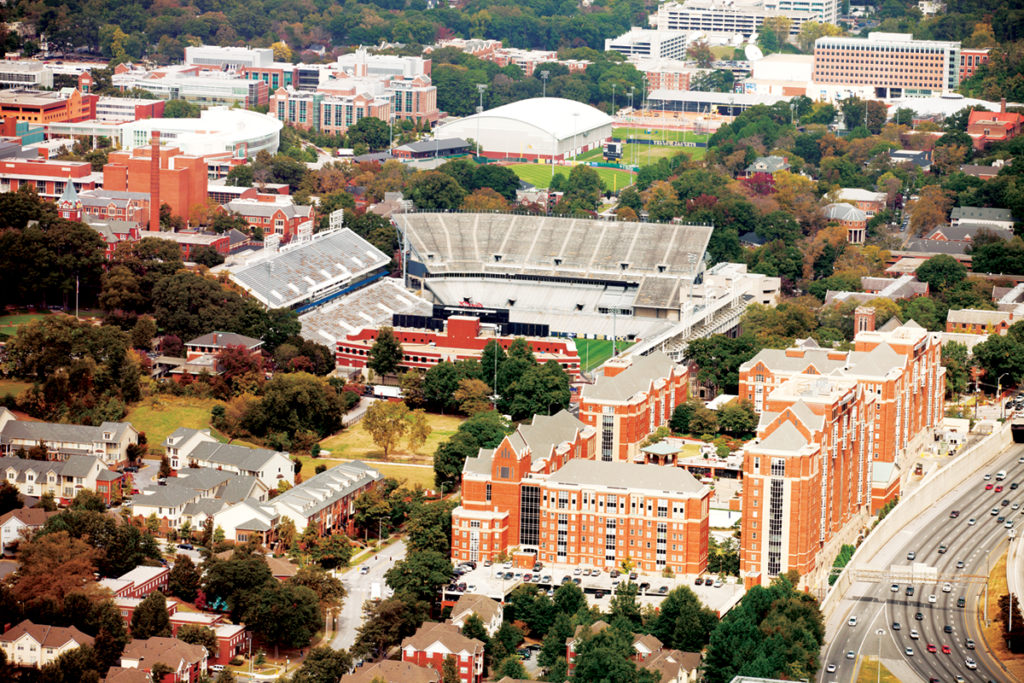 In 2014, Atlanta became a major league soccer expansion city with the formation of Atlanta United FC. Fans were involved in choosing the team’s name, logo and color scheme for the uniforms.

In their debut season, the team regularly sold-out matches in its temporary home of Bobby Dodd Stadium on the Georgia Tech campus. Atlanta United FC currently calls Mercedes-Benz stadium its home and continually draws large crowds at every home game.

In just their second year, the team secured the win of the 2018 MLS Cup after a record-breaking season. This was the first championship to come to Atlanta since the Braves’ ’95 World Series win.

A professional basketball team in the Eastern Conference of the Women's National Basketball Association, the Atlanta Dream has qualified for the WNBA Playoffs in eight of its 13 years in Atlanta and has reached the WNBA Finals three times.

The team’s name was inspired by Atlanta native Martin Luther King Jr.’s famous “I Have A Dream” speech. 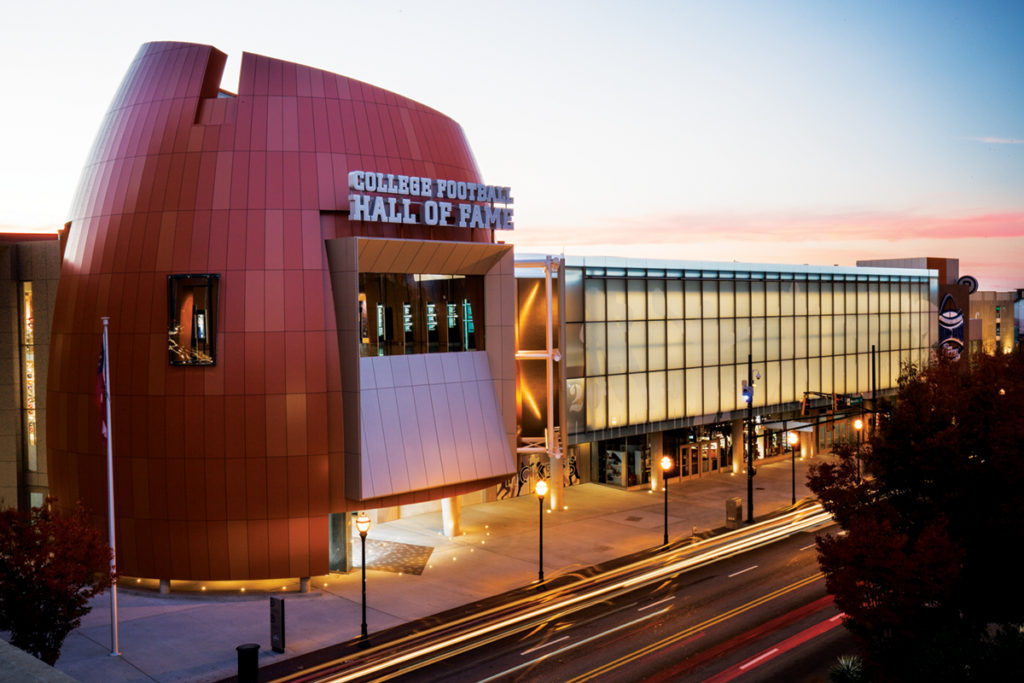 Opening in downtown Atlanta in 2014, the College Football Hall of Fame is one of the city’s top tourist attractions. Located near Centennial Olympic Park and the CNN Center, the museum consists of five themed galleries, 50 interactive exhibits, an indoor football field and an iconic three-story wall showcasing more than 750 college football helmets.

Located in the city of Buckhead, the University of Georgia’s Terry College of Business’ satellite campus offers two MBA tracks for semi- to senior-level professional students. In 2022, the UGA Bulldogs took home the national title after a highly anticipated game against the University of Alabama, ending a championship title drought for the team.

One of the oldest on-campus NCAA Division I football stadiums, Bobby Dodd Stadium is home to the “Ramblin’ Wreck” of Georgia Tech, constructed in 1913. Outside of the state, Georgia Tech may be known primarily for its academics, but the university has 17 varsity sports teams: football, women’s and men’s basketball, baseball, softball, volleyball, golf, tennis, swimming and diving, track and field and cross country.

In 1892, Atlanta hosted the “Deep South’s Oldest Rivalry” in the second intercollegiate football game ever played in the South between the A&M College of Alabama (now Auburn University) and the University of Georgia in Piedmont Park. The annual game sparked a heated rivalry that adds endless excitement and competition to the season.

Annually drawing a crowd of more than 60,000 participants, the AJC Peachtree Road Race is a world-renowned event, hosting an annual 10k run. The event gained such popularity that Atlanta is now known as a city for runners.

The city of Atlanta hosted the XXVI Olympiad, also known as the 1996 Summer Olympic Games. The event marked Atlanta as the fifth American city to host the games and the third to hold the Summer Olympics Games. Through tourist attractions such as Centennial Olympic Park and the Olympic Flame, the legacy of the Games continues.

Locals and international visitors witnessed sports legend Muhammad Ali light the Olympic torch during the opening ceremonies of the games. During the games, he also received a replacement gold medal for his boxing victory in the 1960 Summer Olympics.

For more information about attractions for sports lovers and Atlanta teams, stay up to date on www.KNOWAtlanta.com.

10 Reasons You Should Visit Truist Park

The Atlanta Braves opened their inaugural season at SunTrust Park on April 14, and while Opening Weekend tickets were hard to come by, you should make sure to attend a few Braves g... read more

The area boasts an array of outdoor adventures that are perfect for people of all ages. From drifting down the river on a lazy afternoon to cycling along countless beautiful trails to taking in nine innings of America’s pastime, there’s really something for everyone. read more