In recent years, Alpharetta has emerged as one of the most highly regarded cities in metro Atlanta. And while much of the buzz surrounding the town has focused on the impressive growth of its business community, including the boom of technology companies in the area, there are so many reasons why people choose to call Alpharetta home. In fact, one of the key draws of the city is the outstanding lifestyle it affords its residents, particularly when it comes to the wide array of entertainment options and experiential offerings available throughout the year, which draw locals and visitors alike.

“Alpharetta has truly become one of the top destinations in the Southeast for shopping, dining and live music,” says Janet Rodgers, President and CEO for the Alpharetta Convention & Visitors Bureau. “Alpharetta has created an atmosphere of fun things to see and do in the city and has so much to offer families, individuals, groups and visitors for a variety of interests.”

What makes that entertainment-based atmosphere in Alpharetta a real standout is the fact that its many offerings are available in three distinct districts within the city: North Point, Avalon and Downtown Alpharetta. According to Rodgers, “Each district is delightfully walkable, and two let you sip and shop. Also, all three districts are within one mile of each other.” It’s a very unique city structure that allows people of all ages to have access to everything they could possibly want exceptionally close to home. Additionally, because each district has its own personality, it’s certain that the experience had in each one will be as remarkable as it is memorable.

The North Point area is one of the first spots in Alpharetta to offer the friendly, upscale experience that has become synonymous with the city. Anchored by North Point Mall, which opened in October 1993 as one of the largest shopping malls in America, the area has grown and evolved exponentially over the years. “The North Point area is a shopping haven, with most of the brands and stores that you know and love,” Rodgers notes. In addition to more than 120 stores and a host of dining options within the mall itself and throughout the surrounding area, North Point is home to Topgolf, Main Event Entertainment, Dave & Buster’s, Urban Escape Games and Ameris Bank Amphitheater, among other spots. It also boasts the beloved American Girl® Boutique and Bistro—the only location of its kind in Georgia.

Over the next few years, the North Point area will undergo a major redevelopment that will revitalize the mall’s main entrance and a large portion of the mall property, transforming it into a truly pedestrian-friendly and contemporary destination that includes new residential options. Plans include the development of more than 300 units in three residential apartment buildings and more than 24,000 square feet of freestanding retail and restaurant space, as well as the addition of ample green space, ensuring that the area continues to thrive in the years to come. 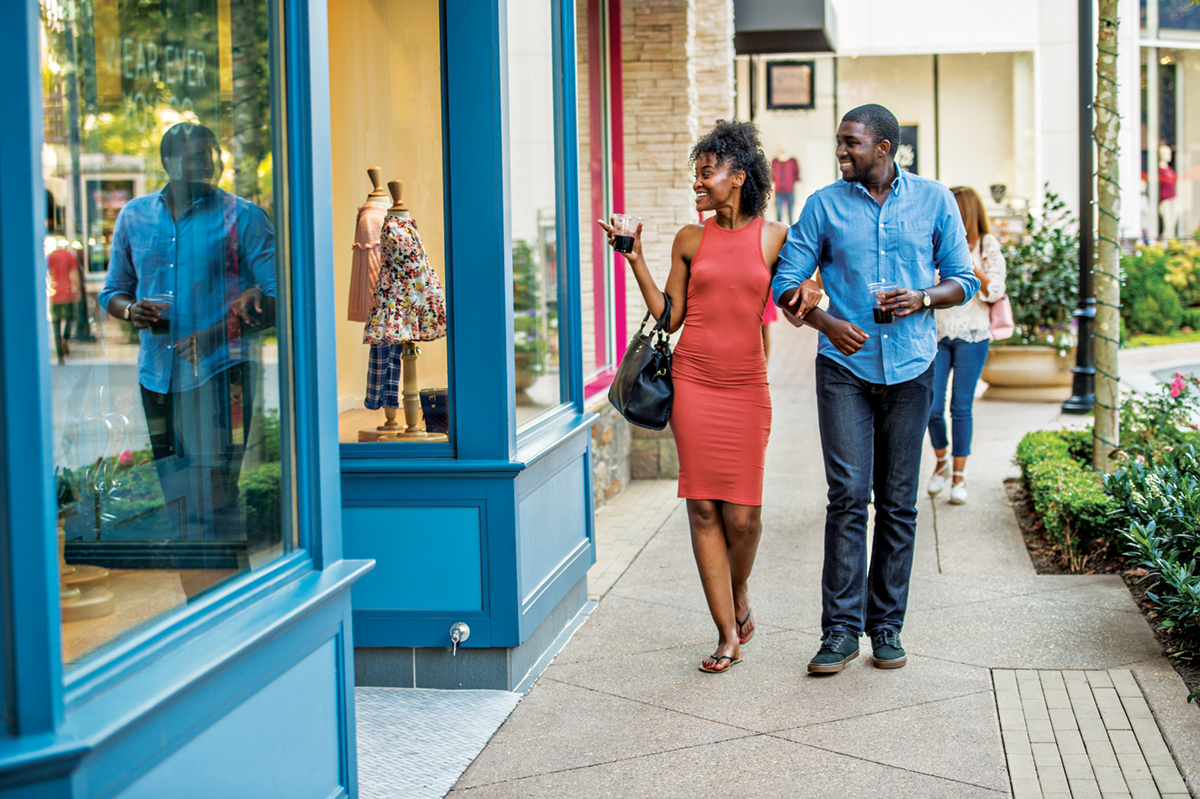 The epitome of metro Atlanta’s popular live-work-play trend, Avalon is a resort-style destination unto itself. It opened in 2014 and currently features more than 500,000 square feet of retail space with 60 luxury retailers (including Apple, Chanel, Lululemon, Pottery Barn, Tesla and more), 25 restaurants (from the Barleygarden Kitchen & Craft Bar to South City Kitchen, Kona Grill and Café Intermezzo), a 12-screen Regal Cinemas theater, more than 100,000 square feet of Class A office space, 100 single-family residences and more than 250 luxury apartments. Additionally, the locale hosts myriad events throughout every season of the year, from Avalon on Ice during the holidays to a Kentucky Derby Party in the spring and Bert’s Big Adventure’s Noon to Night fall fashion benefit. The walkable, 86-acre community also continues to grow with the recent addition of the posh Hotel at Avalon and Conference Center, additional office space and much more. And all of it centers around the now famed Avalon Boulevard, which sits at the heart of the development.

“For a big city backdrop with plenty of small town charm, Avalon Boulevard is a happening place to be,” Rodgers says. “Filled with string lights, tree-lined sidewalks and cozy restaurant patios for al fresco dining, Avalon’s main street features something for every mood. Whether you are shopping, dining, strolling or enjoying one of the many free events at Avalon, it’s a good time for everyone.”

While Downtown Alpharetta has always exuded exceptional charm, the district’s recent revitalization has taken it to the next level and resulted in a new bustling heart of the city, where local residents and visitors can shop, eat, live, work, play and relax. Encompassing both sides of Main Street, the downtown redevelopment initiative has added over 50 retailers and 40 restaurants to the area over the last few years, including elleB, Coalition Food and Beverage, Korner Soak, Truck & Tap, Kilwins, The Red Hound,  Mountain High Outfitters, Citizen Soul, Lapeer and Jekyll Brewing. The area is also home to City Hall and a host of new single-family homes, upscale townhomes and well-appointed apartments. In addition, the refreshed district hosts a number of events, including the Wire & Wood Alpharetta Music Festival, the Alpharetta Arts Streetfest, Taste of Alpharetta, Food Truck Alley, the Brew Moon Fest and the Alpharetta Farmers Market, among others. 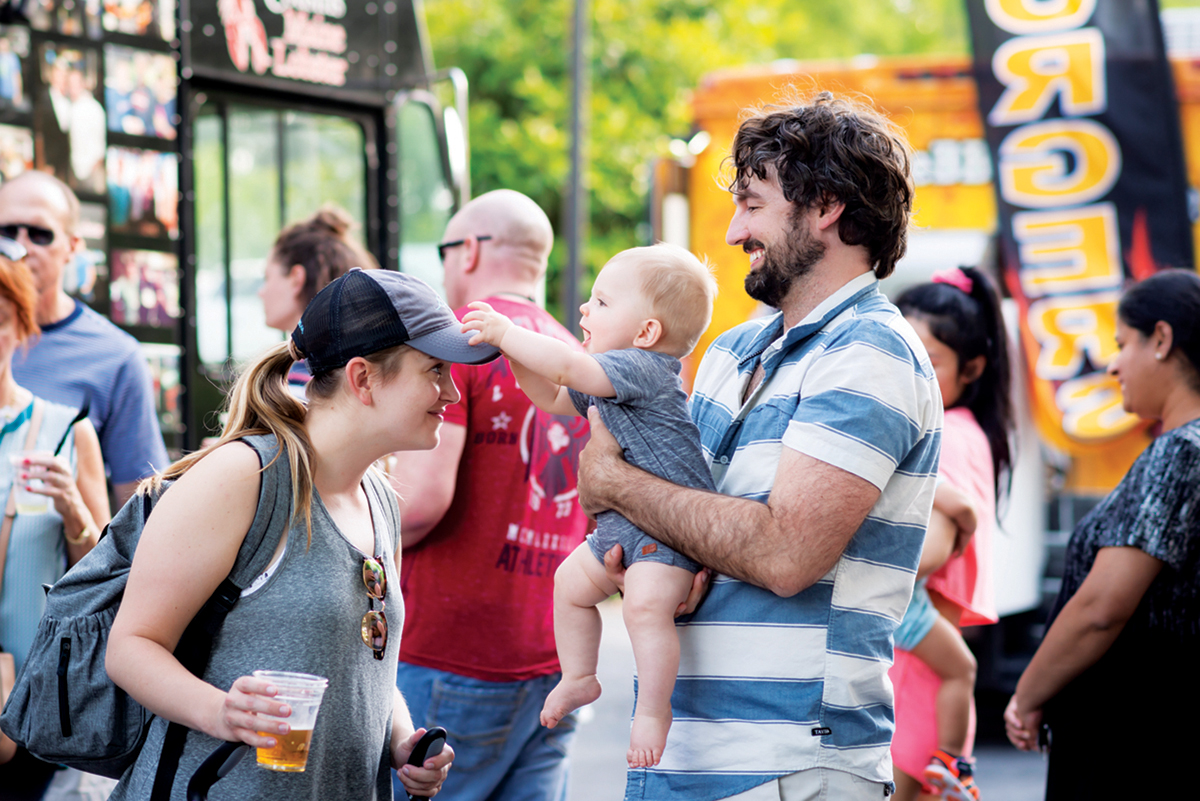 “Downtown has grown to match the upscale appeal of Alpharetta while maintaining its small-town charm,” Rodgers concludes. “Alpharetta truly is an upscale, friendly and beautiful city to visit.”

For more information or to plan your weekend staycation, visit awesomealpharetta.com.

Welcome to Alpharetta Find the perfect Alpharetta hotel. Whether you’re in town for a quick business trip or plan to explore the Alpharetta area while vacationing, Alpharetta of... read more