A Guide to Independence Day Activities in Atlanta

America may be known as the sweet land of liberty, but Atlanta has the catchy title of “Land of the Free, Home of the Braves!” Our Atlanta Braves are playing against the Phillies at home on the 4th of July, but that’s not your only option – there are plenty of other ways to celebrate the red, white and blue in Atlanta this year.

Whether you live inside or outside the perimeter, there are plenty of July 4th celebrations located within minutes of your neighborhood. From free concerts and fireworks to picnics and parades, here are just a few of the events going on in metro Atlanta to help celebrate our independence.

In the early morning hours of July 4, join 60,000 of your closest friends at the largest 10K in the world! The annual AJC Peachtree Road Race is celebrating its 50th year! The race begins in Buckhead near Lenox Square Mall and ends in Piedmont Park. While registration for this year’s race is closed, there are still plenty of ways to participate, from cheering the runners on along the course to volunteering for a number of positions throughout the day.

On July 3 from 6 p.m. until 10 p.m., Kennesaw’s traditional pre-Independence Day Salute to America celebration takes place. The event features two stages of live music, festive entertainment, food vendors and kids’ activities, as well as one of the biggest fireworks displays in North Georgia. The Star-Spangled Fireworks Spectacular is free to the public and is scheduled to begin at 9:30 p.m.

The popular Marietta Independence Day festivities last from 10 a.m. to 10 p.m. with the Marietta Freedom Parade kicking off the celebration Thursday at 10 a.m. The Parade starts at Roswell Street Baptist Church and heads toward Glover Park and Marietta Square, ending on Cherokee Street at North Marietta Parkway. Once the Parade ends, the festival starts! The festival includes free live concerts, museum tours, an arts and crafts show, food, carnival games and a spectacular fireworks finale. 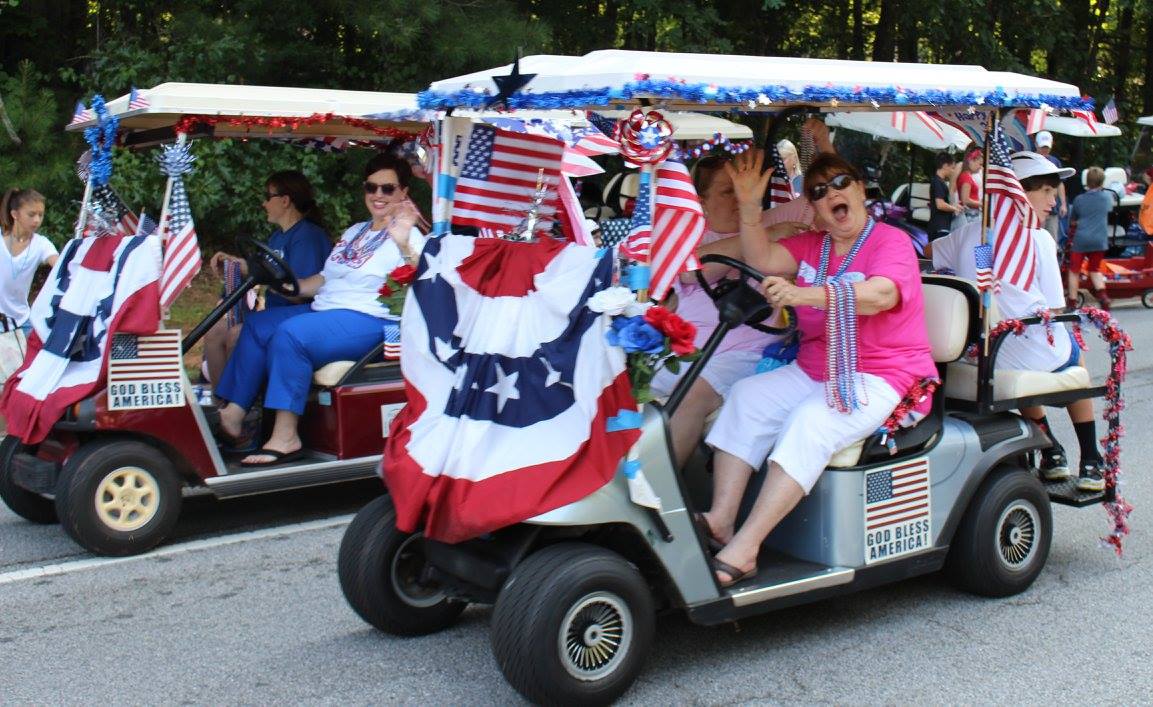 Peachtree City celebrates American independence each year with a Parade![/caption]

The fun begins at 9 a.m. with the Independence Day Parade, which starts on Peachtree Parkway and heads from the Village on the Green to Huddleston Elementary. The fun continues later that evening at the 4th Fest at City Hall Plaza. The Public Safety Expo and Water Battle will be from 4 to 7 p.m., and at 9:30 p.m. there will be patriotic music, entertainment, several food vendors and activities for the whole family! Fireworks over Lake Peachtree begin at dusk.

Stone Mountain Park, where so much history is present, will celebrate Independence Day all week long during its Fantastic Fourth Celebration. The fun starts at 10:30 a.m. every day, July 1-7, with the laser show and fireworks capping off the party each night at 9:30 p.m. Access to the Lasershow Spectacular and fireworks finale is included with paid daily or annual parking admission. For adults, the all-day admission price is $31.95; for children ages 3 to 11, the price is $29.95. 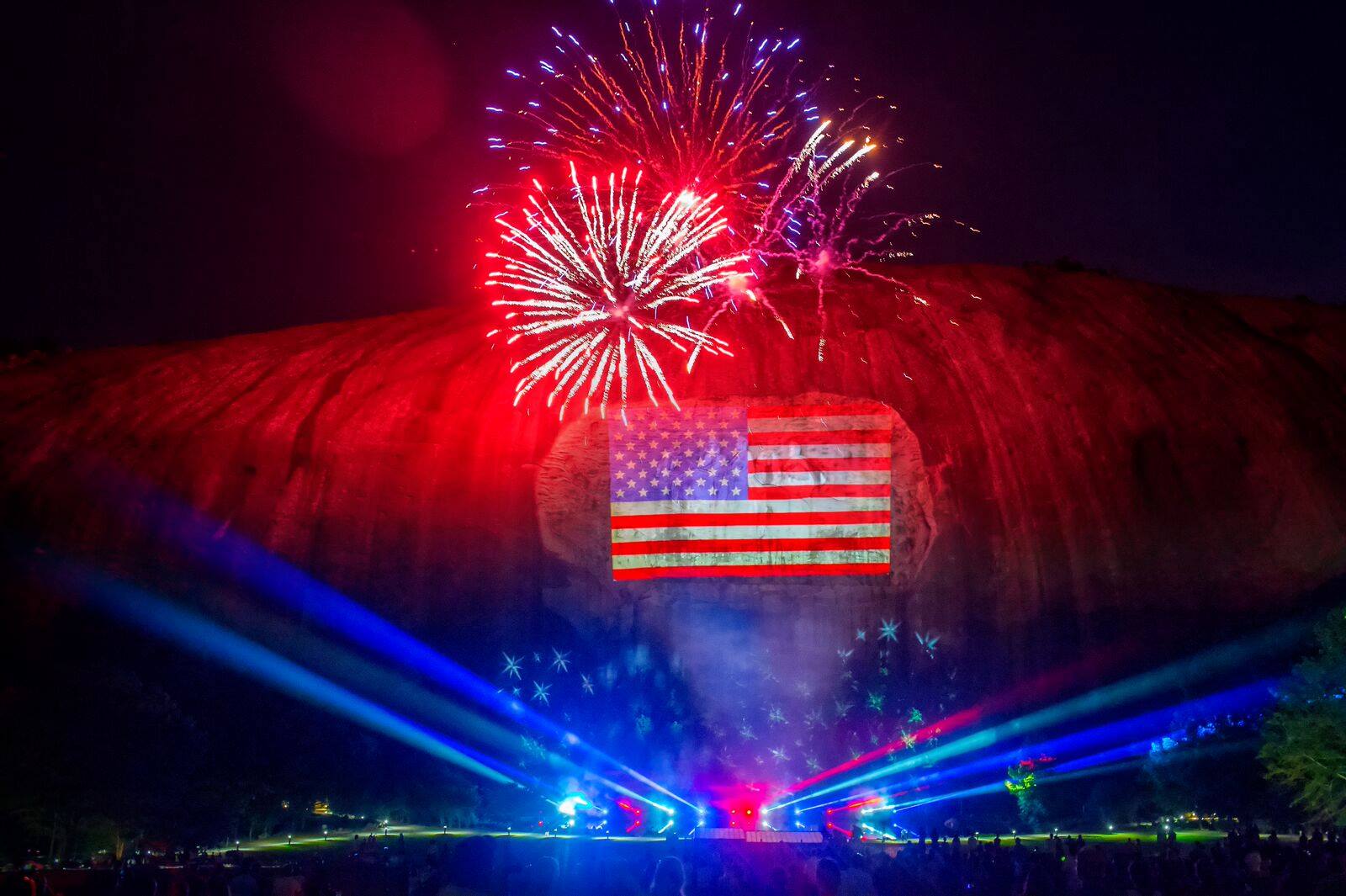 The Pied Piper Parade will swerve through downtown Decatur on July 4 starting at 5:30 p.m. at the First Baptist Church of Decatur. At 7 p.m. following the parade at, a concert featuring the Callanwolde Concert Band will be held on the Decatur Square in the Community Bandstand. Fireworks will begin at approximately 9 p.m.

The Dunwoody 4th of July Parade will take place along two miles of Mount Vernon Road between Jett Ferry Road and Dunwoody Village Parkway. The parade begins at 9 a.m. and will feature floats, marching bands, clowns, animals and local dignitaries and celebrities. Once the parade is over, the fun continues in front of the U.S. Post Office in Dunwoody Village with concerts, parade awards, food vendors, a kids’ zone and a U.S. Citizenship swearing-in! This year’s theme is Happy Birthday Dunwoody! Last year there were over 32,000 spectators in the parade.

The annual Roswell Fireworks Extravaganza will be held at Roswell High School on the front lawn. The event will begin at 5:30 p.m. (on July 4?) with inflatables and carnival games in the kids’ zone. Food vendors and live music from Last Call Band and Banks and Party Nation will be featured, as well as fireworks at dusk!

With the 4th of July quickly approaching, now is the time to plan your Independence Day celebration. There are plenty of ways to celebrate with your friends and family near your neighborhood, as well as bigger city events! Let us know how you’re celebrating this year.